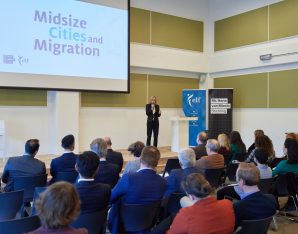 This is a general overview of the talks and recommendations of this symposium, which was moderated by Karlijn Muiderman (PhD-student Wageningen and Utrecht University).
Event date: 12 December 2019

Introduction
Since 2014, the European Union has seen a large influx of migrants. Media and policy attention has largely focused on migrant integration in large cities and rural towns. By contrast, midsize cities, which are defined here as cities of 50,000 – 100,000 inhabitants, have received less attention. This Ralf Dahrendorf Roundtable (symposium) asked how this should be understood: do migrants primarily pose a challenge for midsized cities? Or could migrants pose something of an opportunity? What are effective integration policies? To try to answer these questions, we invited speakers from the Netherlands, Sweden, the United Kingdom and the United States. Academia, local politicians, policy makers, students and business people (with an immigrant background) attended this symposium.

Ingeborg ter Laak (Alderman of Zoetermeer) held the opening speech, as Zoetermeer was the location of the symposium. Being responsible for migration policy, Ter Laak showed an insight into what the city of Zoetermeer was doing to help newcomers feel at home. She stressed the need for language courses to help migrants from all kinds of backgrounds, emphasizing that migrants from a country like Syria require different language training than those from Eritrea. Ter Laak also emphasized the importance of policy diversity between neighbourhoods. Refugees settling in poorer neighbourhoods may need greater assistance than those that settle in more prosperous areas. 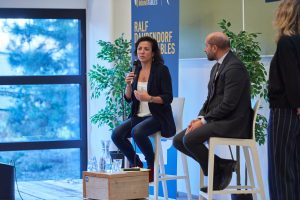 We then moved to Ahmed Marcouch, who is mayor of midsize city Arnhem. Marcouch started his speech by explaining that he came to the Netherlands as a migrant and he orated about his upbrining as son of an Morrocan immigrant and the experiences of him and his father. Marcouch used his background as police officer, ‘mayor’ of city-district Slotervaart in Amsterdam, member of Parliament and mayor of Arnhem to argue for the ‘neighbourhood approach’. (A project called ‘Van Wijken Weten’, ‘Knowing Neighbourhoods’, in Arnhem.) This dovetailed with a policy recommendation by Ter Laak, as Marcouch similarly believed that council targeting of particular neighbourhoods is an effective method to strengthen integration. Interestingly, Marcouch argues that the council should focus on helping migrant mothers, as having their support typically leads to obtaining government support of other members of the family.

Following Marcouch’ speech, we moved to the third local politican of the day: Nadia Arsieni, councillor in Rotterdam for D66. With her experience at the COA (Dutch Organisation for Receivement of Asylum Seekers) she had a great perspective on the best trajectory of integrating asylum seekers: not giving them welfare benefits with the requirement of two days of language course a week, but a program of three elements: work, vocational training and learning the language. She insisted language should be learned in daily life, e.g. on the workplace, and that employee-seeking employers should be incentivised to train and hire these immigrants. These immigrants would get payed for a 28-30 hour work week, with free vocational training and language courses attached to this. The government would pay a part of their wage, but employers should put in too, as they should be motivated to let these trainees complete their training quickly. She also showed this approach was far more cost effective than providing these immigrants with language courses and welfare benefits alone, as the results of her policy showed that many more immigrants got a (well-paying) job earlier. This she also used to impress and convince more conservative (in nationalist and fiscal sense) parties in Rotterdam to endorse this new policy. 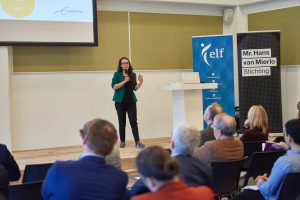 First Session: Refugees and Migrants in the City
The first panel started with a presentation from Patrick Joyce. Joyce showed results from a comparative study of Scandinavian (Denmark, Sweden, Norway) experiences regarding migrant labour participation. This revealed that not only is there substantial policy variation between these similar countries, their efficacy also differs considerably. One useful insight was that early government intervention in migrant integration yields far greater results than late intervention. A key instrument, therefore, is to make sure you tackle any problems before they grow out of hand. Another insight that may benefit host countries is that migrants may possess skills that are highly useful for midsize cities. It is therefore important to thoroughly investigate the skills migrants already have, and how these can be applied in their new environment. Sometimes they only require language training and no other professional or vocational training, which could be a beneficial insight for both the migrant as the local government.

Ilona van Breugel, researcher at the Erasmus University Rotterdam, followed up. Her research focuses on the local governance of immigrant integration, also in the European perspective, and she presented part of her research on the developments in integration policy after the surge of asylum seekers in 2015 and the distinct ‘types’ of reactions by (16) Dutch municipalities between 2014 and 2018. She insisted on the importance of looking at the cities with varying sizes and positions in migration policy, instead of a (usual) focus on capital and gateway cities. One common broader trend that was recognisable in local integration policy was the dominance of a socio-economic and universalist (a generic) approach to integration with a focus on participation and self-sustainability. Nevertheless, (local) city migration policies differed in the combination of approaches and models. These she differentiated in three types: pro-active, one-dimensional and reactive migration and integration policies. While city-size roughly accounts for the distribution across these types, it did not account for clusters of intercultural cities within these categories.

The third presentation was by Nicola Delvino, researcher at COMPAS, University of Oxford, gave a presentation on undocumented immigrants (UIs). Delvino stressed that, being illegal aliens, UIs usually receive only minimal government services. This is problematic, since it may be cost-effective for cities to still provide some services, even though UIs do not officially qualify for them. A good example of this is medical care: it may be wise for a city to provide some health care to UIs, since not doing so may aggravate his or her injury, leading to far greater costs (e.g. emergency care). Delvino advised what discretionary space the national laws currently give cities, and how these vary between states and even within them. As a policy recommendation, Delvino showed that there are various EU-subsidies available to increase government services to UIs. In the subsequent breakout sessions, Delvino argued that these services are still sufficiently limited not to encourage undocumented migration.

Second session: Local Integration Policies
Marthe Hesselmans, who previsouly worked for the Mr. Hans van Mierlo Foundation and now works for the official government body for public policy research (Dutch: WRR), kicked-off the second panel session. Hesselmans warned participants to be attentive to variation between midsize cities: some have highly successful integration policy and scored very well on factors as employment, housing and safety. Furthermore, some cities that used to be unattractive are now becoming more attractive to people leaving large cities, while the opposite is true for some midsize cities with migration and integration related challenges. (Zie dit artikel voor meer over Hesselmans’ presentatie).

Our American speaker Andre Lim was next. Having someone from the other side of the Atlantic immediately proved valuable, as his experience was far more upbeat than that of his European counterparts. Lim, who is a director of quantitative research at a think-tank called the New American Economy, showed that many US cities actively try to attract migrants to their city. Their reasons for doing so are varied, but range from meeting labour market demands, revitalising neighbourhoods, and elderly care. Lim also showed that the usual US definition of a midsize city is far larger than in Europe: in the US a midsize city may have up to one million inhabitants. Interestingly, many midsize US cities (within our definition), such as Grand Forks, North Dakota, predominantly view migration ‘as an opportunity’: migrant-entrepeneurs could revitalize a city with their businesses and declining and depopulated neighbourhoods could be repopulated. 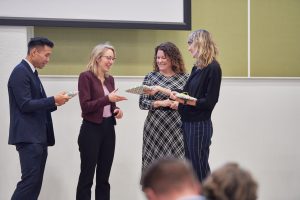 Our final speaker was Anne-Marijke Podt, councillor in the city of Utrecht. Podt’s presentation focused on ‘Plan Einstein’, which was a Utrecht council initiative to help migrants settle in the city of Utrecht. The government did so by housing them not in a migrant center on the edge of the city, but rather to house them in the city center; next to this, a lot of other communal activities and (vocational) trainings were hosted at this center. This not only helped the migrants to get exposed to life in the Netherlands, but also helped native Dutch people become familiar with newcomers. A second policy recommendation by Podt was to ensure that the council does not relocate migrants. Once they arrive in the Netherlands, migrants should receive adequate housing from day one. Any relocation will hamper their integration in the Dutch labour market. A third recommendation was to ensure that government initiatives are not ad-hoc, but rather receive structural funding (either from the council itself, the central government, or other benefactors). This was precisely the problem with Project Einstein, which has now been terminated, and many of the positive effects have dissipated.

You can find more on this topic in the videos below ( with policy recommendations by three speakers.  Furthermore, you could download the publication New in Europe: A Vision on Migration and take a look at this article by Marthe Hesselmans.